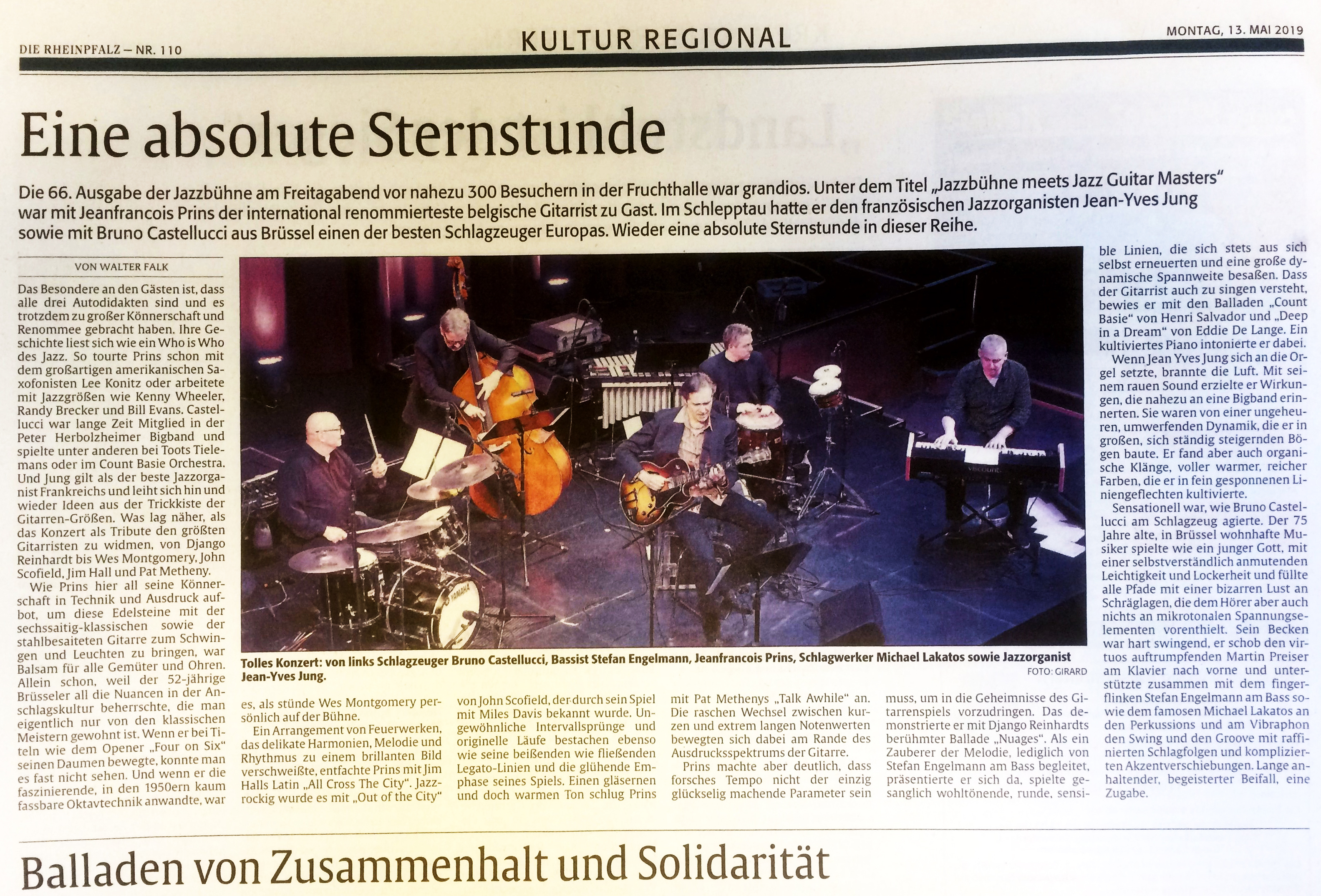 An absolute grand moment
The Jazzbühne’s 66th edition in the Fruchthalle on Friday evening in front of an audience of about 300 was terrific.
Under the title “Jazzbühne meets Jazz Guitar Masters” Jeanfrancois Prins – the most internationally renowned Belgian guitarist – was the main guest. In tow he had brought the French jazz organist Jean-Yves Jung, and Bruno Castellucci from Brussels, one of the greatest drummers in Europe. This was another great moment in this concert series.
What is unique about the guests is that all three are self-taught and have nevertheless brought themselves to great mastery and reputation. Their story reads like a who’s who of jazz. Prins, for instance, toured with American saxophonist extraordinaire Lee Konitz, and worked with jazz greats like Kenny Wheeler, Randy Brecker and Bill Evans. Castellucci was a long time member of the Peter Herbolzheimer Big Band, and worked among others with Toots Thielemans and the Count Basie Orchestra. And Jung is considered the best jazz organist in France, and occasionally borrows ideas from the guitar greats’ bags of tricks.
What could be better than dedicating the concert as a tribute to the greatest guitarists, from Django Reinhardt to Wes Montgomery, John Scofield, Jim Hall and Pat Metheny?
The way Prins offered all his technical and expressive mastery to make those gems vibrate and shine with his classic six-string and steel-strapped guitar, was a balm for all minds and ears. First of all because the 52-year-old Brussels-native mastered all the possible strumming nuances, which one is actually only used to hear from the classical masters. When he moved his thumb for titles like the opener “Four on Six”, you almost could not see it. And when he applied the intriguing octave technique, barely reachable in the 1950s, it was as if Wes Montgomery was personally on stage smiling at you. Prins sparked a fireworks arrangement on Jim Hall’s “All Cross The City”, which blended delicate harmonies, melody, and rhythm into a brilliant image. It was jazz-rocky with “Out of the City” by John Scofield, who became known for playing with Miles Davis. Unusual interval jumps and original runs captivated, as well as his biting and flowing legato lines, and the glowing emphasis of his playing. Prins struck a glassy, yet warm tone with Pat Metheny’s “Talk Awhile”. The rapid changes between short and extremely long note values moved at the edge of the expressive spectrum of the guitar.
But Prins made it very clear that brisk pace does not have to be the only blessing parameter to get into the secrets of guitar playing. He demonstrated this with Django Reinhardt’s famous ballad “Nuages”. There, accompanied only by Stefan Engelmann on the bass, he revealed himself as a sorcerer of the melody, playing vocal-sounding, round, sensitive lines that always renewed themselves and had a large dynamic range. The guitarist proved that he also knows how to sing with the ballads “Count Basie” by Henri Salvador, and “Deep in a Dream” by Eddie De Lange. He installed there a perfect piano nuance, where his voice perfectly aligned with his breathing.
When Jean Yves Jung sat down to the organ, the air started burning. With his rough sound, he achieved effects that almost reminded one of a big band. He built them up into a tremendous, dazzling dynamism in large, ever-increasing arcs. But he also found organic sounds, full of warm, rich colors, which he cultivated into finely woven networks of lines.
Sensational was how Bruno Castellucci acted on the drums. The 75-year-old musician living in Brussels played like a young god, with a seeming lightness and looseness, filling all the lines with a bizarre desire for obliqueness, but withheld from the listener any microtonal tensions. His cymbals were swinging hard, his snare pushed the virtuoso lines of pianist Martin Preiser forward, he danced under the guitarist and, together with the skilled bassist Stefan Engelmann and the renowned percussionist and vibraphonist Michael Lakatos, he supported the swing and groove with sophisticated strokes and complicated accent shifts.
Long lasting, enthusiastic applause, an encore.